I have sat in front of 3 GPs and had to explain what cerebral palsy is. So I didn’t hold out much hope when Kev & I went for our (pre) prenatal appointment. But the doctor didn’t seem fazed and asked if we had any questions. Of course, my mind went blank even though the questions have haunted me ever since Kev and I had talked about wanting a family.

How much pain would I be in? Would my balance be even more compromised by pregnancy? Would I be able to work? Walk?

Of course, a general practitioner wasn’t going to know the answers. But that’s perhaps the most frustrating part. I’ll have to be expecting before anyone can even take a guess. I was hoping a light bulb would go off over his head as soon as I said “cerebral palsy” and he’d say “Oh, you want to talk to Dr. Jenkins at the Heath, he’s an expert in these things.” No such luck. At least, not in South Wales.

But, as Kev pointed out when we discussed it later, how cerebral palsy manifests is such a spectrum – no two people with the condition are going to respond in the same way. But even that doesn’t feel helpful.

But the good news: cerebral palsy is not hereditary. My traumatic birth does not put me at any greater risk of a repeat with my child. Every chance of a happy, perfectly healthy little one.

That appointment was January 2016. We just went plodding on in our own merry little way. I spent every month analysing pretty much every second my period was late, even though it probably wasn’t and I’d just done a lousy job of learning to track my cycles. Been having periods since I was 14 and stupidly, can still be surprised by their arrival.

But it seemed as though, every second I started hoping for a baby, my uterus would hear me and quite literally open the floodgates just to taunt me. And if it didn’t, I’d gotten used to the one line appearing on pregnancy tests. It was just a cycle I went through to ensure there would be no baby this month. Kev would roll his eyes each time I said I needed to buy a pregnancy test. And he was always right and my period would normally arrive within the hour of my one line letdown.

April’s period was four days late. I just wanted the damn thing out the way so took a detour from my morning bus into work to the Tesco Express and made a beeline for the pregnancy tests. No hope this time. Just a “This’ll make you hurry up, won’t it?”

I ridiculously have never managed to pee on a pregnancy test. I’ve always had to pee in a cup and dip the test to be sure of a result. So I had to steal a cup from the staff cupboard, lock myself in the disabled loo before someone realised I wasn’t at my desk yet and do the deed.

Really paid no attention to the whole charade other than trying not to pee on my hand because, you know – gross! The dye started going through the windows and I was thinking; I don’t know why you’re doing this, Jo. You do this every time, and it’s never anything. The dye will leave an empty window, you’ll get a negative and be bleeding by lunchtime.

Except…. where I’d imagined a line in the dye soaked test window so many times before – there actually was one! And a line in there meant pregnant! I knew that, but once there were actually two lines in front of me, I made myself check the box, just to be sure!

Positive! This was actually test number 5… it took 7 in total to convince me!

I never wanted to go into a pregnancy with no idea of how the cerebral palsy would affect it, or me. This is why Kev & I tried to pre-empt it by asking for help from the doctor. That help never came and now it was too late. I wanted to get excited about being pregnant. As it turned out, I was already over four weeks along.

The first couple of weeks, besides feeling nauseous pretty much all the time were okay. But by the time I was eight weeks along, still not having told anyone other than our immediate family, pain was building in my hips, radiating to the small of my back.
I’ve always been used to aches and pains, but being newly pregnant and scared of everything in my system having an effect on my brand new tenant, I didn’t want to take pain killers.
My probation period at work had been extended to nine months instead of six. By the time my end of probation meeting came around, I’d be twelve weeks gone with no idea of the outcome, or whether we had any security. As it turned out, my first scan was scheduled for the day after the meeting. Which in itself was the day before we were flying off on honeymoon. 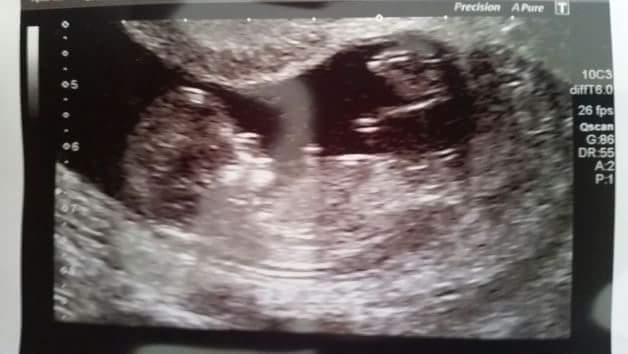 Our first ever look at our little Fox cub – when we were told to expect a Christmas Day arrival!

That was meant to be an all-inclusive surprise. I’d taken charge of our wedding nine months before and Kev wanted to be able to plan the honeymoon. It all went to Hell with our baby surprise though. What was meant to be ten days in Cuba – Fifties Cadillacs and rum on tap – had to be scrapped with next to no notice due to the Zika virus. So I got to scratch one off the bucket list and we went to Disney World instead. Couldn’t drink and was constantly knackered, so it wasn’t the romantic, relaxing time we’d been after, but Cuba’s gone back on the list for a later date.

So at least I knew there was a holiday coming if it turned out I was jobless. I wasn’t, and good job too because  I’d been working solid twelve-hour days to try and get a handle on my new position and had had a mini-breakdown of sorts around the time of my original probation – also the first anniversary of my dad’s death.

I didn’t mention the pregnancy until we got back and I was fifteen weeks along. I wanted to be sure that my job was secure. As it was, I blurted it out when my boss came and sat opposite me in our little quad of desks.

“Do we need to go talk somewhere else?”

Other members of our team were sat at the other two desks, but I just didn’t care at this point enough to get up from my desk.

“No, they’ll need to know too. Kev and I are expecting a baby!”

Note to self: If you intend to blog about pregnancy, don’t leave it almost 4 years until you’re trying to remember! Apologies!

My second trimester was a blur of working too hard, of aches and pains I was unsure of. Working too hard whilst trying not to. I think I was compensating for the fact that there were seemingly endless antenatal appointments, physio and hydrotherapy.

It was a strange mix of feeling looked after and yet completely ignored all at once. There were lots of sympathetic faces and yet, no-one had knowledge of cerebral palsy at all. I wanted to know if my pains and challenges were normal, if I could expect them to carry over into my experience of motherhood. But besides having heard the name of my condition amongst medical training, no-one had anything to offer beyond “You’ll be great”.

Polite perhaps, but utterly useless as a practical resource.

Still, better to be kind than outright daft. There was one professional outside the NHS and antenatal care that when I approached them for advice and support said: “It would be better not to be pregnant wouldn’t it?” It was said as in “This is why you’re in pain and struggling” but it was certainly not what was said and I was utterly brushed off when I complained about lack of professionalism because they were a well respected member of staff who “wouldn’t have meant anything by it.”

In hindsight, this should have been the beginning of realising that professionals don’t always know best. But I’m sure many a first time mum will tell you their nerves, their worries have them heavily relying to those they believe know better than they do. Now, I would tell myself and others like me to trust their own mind, their gut and to speak up, loudly, in their own defence. No-one else will do it.

At 20 weeks, our resolved to remain neutral and enjoy a surprise at birth was destroyed as soon as the sonographer carrying out my scan informed us they could tell us what baby was. “Well, if you know”, Kev told them, “I have to know!” And so we learnt our firstborn was a beautiful daughter and my bump was immediately christened Imogen. She was never going to be anyone else and her name belonged to her long before birth.

The fatigue quickly became something far beyond what I had been experienced as a woman ageing with cerebral palsy. My iron levels were managed, but still, I was exhausted. The weight of the growing baby pulled my posture further out of whack, my balance was even more off and my pain intensified.

The only saving grace (as I was to discover in my second pregnancy) was the joy of the kicks and nudges that came with the trials of a swelling belly.

Exhausted as a word did not cut it. I took leave as soon as I was legally able to 29 weeks. I was heavy, sore and so, so tired. I took annual leave until 32 weeks and then maternity leave kicked in. I do so wish I hadn’t needed to do that, because it took away from time with my beautiful girl when she was here and I was certainly not ready to leave her when she was 8 months old and I had to return to work. I did it because, like millions of others, finances said I had o, but oh, it broke my heart.

As it was, I tried to make the best of all those weeks at home alone before baby came. I had a bucket list of activities, books and films I wanted to do, or finish, or watch, ideally from the sofa. I tried to take care of myself, sleeping lots and reading my university textbooks in my snuggly nursing chair. (I was in the second year of my Childhood & Youth Studies degree at the time – my psychology module. It was hard going, but I’m proud to say I completed it!)

By 36 weeks, a spell of suspected Braxton Hicks sending me to hospital for monitoring, I was completing done in. I ached constantly, couldn’t sleep for not being able to move properly. Physiotherapy was near impossible given the size of my bump and all of my muscles seemed to be shortening as a result, completely hindering any movement I was able to make. I was utterly miserable.

(Again, this was all pretty much repeated towards the end of my second pregnancy in 2020 also, but at least I knew to expect it then, or at least, not to be so concerned by it, which is probably just as well given we were in the middle of a pandemic by then!)

And so, on meeting with the consultant at 36 weeks and relaying my misery to her, Squidge’s birth story began….